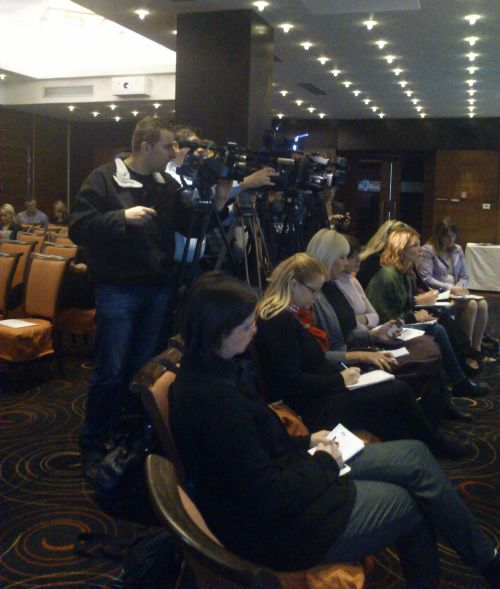 Today at the Final Conference in Sarajevo, the results of the project "Development and promotion of health spa tourism in the cross-border region of Bosnia and Herzegovina - Serbia - Cross spa" were presented, which was in turn financed by the European Union amounting to 85% of the total project value of € 452,152.

The project is aimed at strengthening regional cooperation and sustainable economic development of the cross-border region of Bosnia and Herzegovina-Serbia, through the establishment of a joint integrated tourism offer spa-spa tourism. The leading implementer of the project and the organizer was the Foundation of Local Democracy Sarajevo with its partner from Serbia the Tourist Organization of Serbia Western region of Užice. Their partners in the project are the Sarajevo Regional Development Agency SERDA in Bosnia and Herzegovina and the Regional Development Agency Zlatibor in Serbia. The project included three thermal spas in Bosnia and Herzegovina: Terme Ilidža, Reumal Fojnica and Aquaterm Olovo, and in Serbia three air spas: Čigota in Zlatibor, Zlatar and Priboj spa. The gathering was addressed by Massimo Mina, the Head of Operations Department for Social Development, civil society and cross-border cooperation of the EU Delegation to Bosnia and Herzegovina, which stressed the significance of the project results and added value to the project – establishment of the Association of Spas in B&H, emphasized the great potential of the IPA cross-border region for medical tourism, as well as the cultural, historical and natural heritage and referred to further improvement of promotion of the common health tourism and its positioning on wider European markets. Jasmina Mujezinović, executive director of the Foundation for Local Democracy, the leading partner, spoke about the excellent cooperation between the partners, 6 spas project beneficiaries and all stakeholders in the project implementation. She stressed that on the road to the EU Serbia and B&H need to build new and responsible partnerships, on the basis of regional cooperation. Project CROSS Spa is an excellent example of how through such forms of cooperation there is a possibility of increasing visibility in the tourism market, improving the tourism offer through joint activities and thus increasing the number of tourists visiting the spas as well as the whole region. 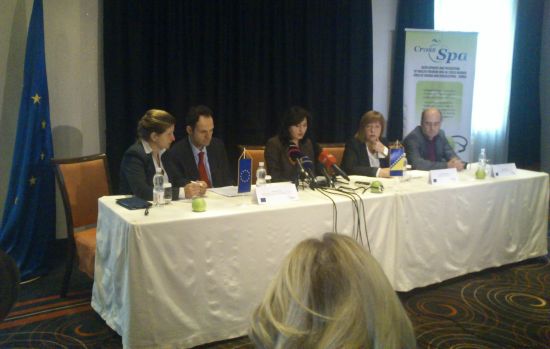 She added that the project in Bosnia and Herzegovina was also institutionally supported by the Federal Ministry of Environment and Tourism through co-financing and the invitation for the project CROSS SPA, spa and touristic organizations of the cross border area to have a presentation at the International Tourism Day that was organized in May 2014 in Sarajevo.
Miroslav Rađen, Director of the Tourist Organization of the Western Serbia region of Užice, a partner in the project, said that in the implementation period April 2013 - October 2014 they implemented a number of activities, which have produced outstanding results.
Snežana Milisavljević, project manager in the Regional Development Agency Zlatibor, talked about project results. Based on the performed analysis of the status and opportunities of health tourism in the cross-border area and recommendations, 5 trainings have been realized with 280 students for management and employees in 6 spas in the cross border area on the European Union standards in the delivery of health and wellness practitioner services and the certification procedure. Experts from the Special Hospital in Čigota passed on their knowledge and experience in the program for healthy weight loss spas to colleagues from in Bosnia and Herzegovina: a new joint tourist product was created - Integrated health tourism with more than 15 individual programs, a created Marketing plan to promote this product and to promote it through two brochures and a study trip through the region, organized for representatives of tour operators from Europe and the region, as well as the media.
Dr Senad Selimović, the Director of the Spa Aquaterm Olovo thanked the donor the European Union and the implementer the Foundation of Local Democracy on the great support in improving the infrastructure of the Aquterm spa and the reconstruction of part of premises for the new Cabinet for healthy weight loss and acquisition of the necessary equipment: devices for the training, medical appliances and furniture for two doctors' offices.
"The donated equipment, as well as the transfer of knowledge and experience of the Special Hospital Čigota in healthy weight loss program for children and adults, has enabled the introduction of new product offers in our spa - healthy weight loss program." It was also noted that the Foundation of Local Democracy with the donor the EU, has provided additional resources within the project CROSS SPA, using reserves and savings to help repair the great damage the Spa Aquterm sustained during the flooding in May 2014 through the acquisition of one four-celled galvanic bathtubs.
Dr. Alexander Đenić from the Special Hospital Čigota from Zlatibor expressed their gratitude for the donated equipment for a room for exercise within the project CROSS SPA. He stated that for him and his colleagues from Čigota this project and meeting with colleagues from spas in Bosnia and Herzegovina was an excellent opportunity for an exchange of experiences and knowledge and new approaches to service delivery on the health prevention, new customer service for spas-tourists, people who care about their health and healthy lifestyles.
All the participants were unanimous in their assessment that the project was successfully realized, and that the results obtained are much more significant than anticipated, because of the excellent cooperation was established between the 6 spas in the cross border area, which will be continued through the implementation of the joint tourism product, or rather through the identified several joint programs offered in health tourism.